Platitudes of Gratitude; Not all Thank Yous are Gratitude

Thanking someone because you must, is not gratitude. Gratitude is more than the socially accepted habit of saying, thank you. Thank you, has many meanings, which vary based on your culture. In the Un 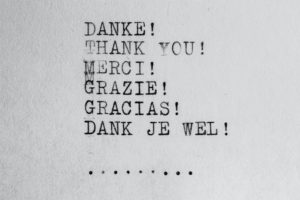 ited States thank you is ingrained and a must say phrase if you care about being socially acceptable. I can identify at least three types of thank you. Only one is gratitude, the rest platitudes.

A friend of mine who moved here from Germany over 20 years ago has a thank you switch. When she visits Germany, she turns thank you down because it’s not acceptable to say thank you for things that are expected and part of every day.

To complicate things depending on how thank you is delivered it has different meanings. It depends on the intention of the thanker. Here are three general types of thank yous.

Thank you #1 – Culturally Accepted. This is an automatic and unconscious response based on the culture. It’s a habit. An individual might repeat it as often as 50 times a day. It’s simply a signal that a transaction is completed. In conversation, thank you can be a seemingly polite technique to avoid further conversation. I end telemarketers’ phone calls by sharply saying thank you and hanging up the phone. “Thank you for stopping by”, “thank you for shopping here,” “thank you for a job well done”, can all be socially acceptable and platitudes of gratitude.

Children are taught early to say “thank you” for gifts received even if they do not like them. In some cultures, it is inappropriate to thank someone for doing what is their responsibility. In general, this type of “thank you” does not represent true gratitude.

Thank you #2 – Reciprocity. Giving something with the expectation or hope that something will be given in return. Organizational currencies are a convention for getting things in organizations. What do you have that someone else wants? Recognition, rewards, skill-building, social, or moral support? If you need better support from an IT department and they need access to a person you know, by introducing them, it is a form of trading organizational currencies. Project managers with team members who do not work for them know that a secret to influencing without authority and getting team members to meetings is food. This is a form of reciprocity, I’ll feed you if you attend.

Thank you #3 – Gratitude. An expression of feelings of appreciation. No agenda. No intent to receive something in return. It is a feeling of positivity and goodwill.

Giving something without any expectation of anything in return is gratitude. Ironically even when something is given in gratitude, there usually will be an unexpected return. A “thank you” said in true gratitude comes with authentic intention. It is more meaningful and can be more challenging and to say thank you as gratitude, rather than just a platitude.

Gratitude or platitude?  In the future next time, you say thank you see if you can identify what type of thank you, you are giving.